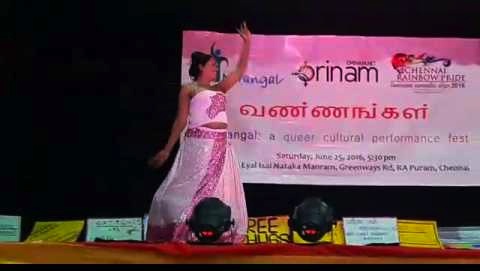 Vannangal (Colours) is an annual LGBT performance festival in Chennai that has been held every June since 2009.  It was initiated as a joint effort of Shakti Resource Center and Orinam (formerly MP), and was formerly named Nirangal.

LGBT persons and groups have used performance as a medium to foreground several issues. While for some, performance is primarily a means to draw attention to their public health work, for some others performance is a tool to talk about rights and entitlements. Many performance artists are also engaged in queering the traditional art forms that they are practitioners of. Yet others carve out their performance niche using contemporary literature and theatre.

Vannangal presents a sampling of this variety of artists and their performance work. While the majority of performers are from Chennai, we have also hosted artists from Kumbakonam, Bangalore, Hyderabad, and the US, in the past.

It is a part of Chennai Rainbow Pride month celebrations that raise visibility of LGBT communities and issues in the month of June and July.