Surabhi Shukla has been studying the experiences of queer students in Indian schools since 2014. Based on this work, she has developed a website genderdiversityandschools.in that aims to provide resources for parents, teachers, and students alike. It is aimed as an educational tool on sexuality related matters. Shukla hopes to provide some support to students who face or have faced bullying in schools on the basis of their real or perceived sexual orientation or gender identity. The website contains academic resources (publications and online resources), there are some helpline numbers as well. She has also created a school kit.

The findings of her study are available here. The abstract of her study is presented below, from genderdiversityandschools.in/research-design/

“I present the results of a first of its kind qualitative study to understand the experiences of queer students during their K-12 education in India. “Queer” signifies various counter-heteronormative identities apart only from lesbian, bisexual, gay and transgender (Narrain and Bhan, 2005; Menon, 2008). Using semi-structured interviews with self- identified queer persons of <=25 years of age, focus group discussions and expert interviews, I develop a coding scheme based in grounded theory and guided by Olweus’ (1993) definition of bullying.

I find that: 1. Gender non-conforming students are labelled as gay, lesbian or transgender and are bullied verbally, physically, sexually and relationally by students, teachers and administrators, regardless of their actual sexual orientation. 2. Perhaps, due to the androcentricism and invisibility of female sexuality, gender non-conforming PAGFB are subjected to less bullying than gender non-conforming PAGMB, up to a certain point. 3. Schools are sex negative with little or no sexuality education, and no policies prohibiting bullying. Complaints are either trivialized or bullied students are blamed for bringing this upon themselves by being gender non-conforming. Bullied participants report isolation, depression, fall in grades and educational aspiration, suicidal ideation and increased absenteeism but many also excel academically and in co-curriculars. Some love school as it is the only place that they can be themselves. Participants and experts suggest that comprehensive sexuality education and inculcating equal respect through effective school and state based policies may create more inclusive school climates.”

I attempt a model “Anti-Discrimination and Sexual Rights” policy based on my findings, legal decisions and suggestions from participants and experts. 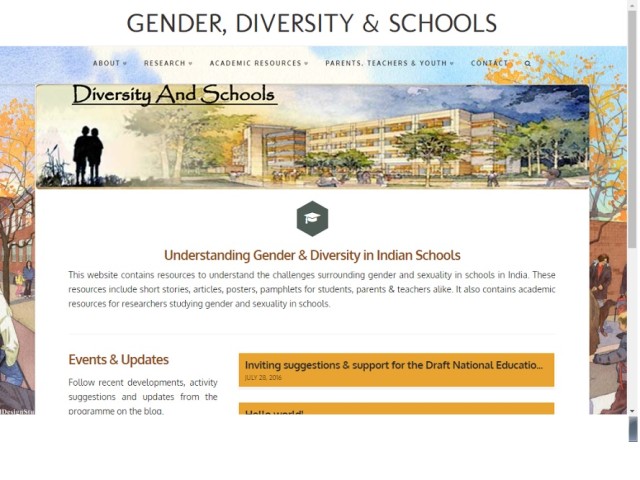 Editors’ note: This post has been added to Orinam’s compilation of resources for educational institutions in India, at http://orinam.net/resources-for/educational-institutions/

← Previous post
How the Anti- Discrimination and Equality Bill affects the LGBT Community and Those Perceived to Belong to the LGBT Community
Next post →
TransVision: new community video channel by transpeople in India