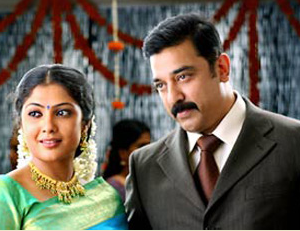 One would have expected that all that warning from my queer friends about Vettaiyadu Vilayadu would have braced me up for the actual encounter with the movie. Well, clearly not. Otherwise, I wouldn’t have felt as horrible as I felt in the theater yesterday and wouldn’t have come out as disturbed as I did. I never knew I was so slow on the intake.

It is very unfortunate that the first, open representation or discussion of homosexuality in Tamil movies should happen this way. In the first place, the two men being ‘accused’ of being homosexuals are psychopaths-serial killers who rape and murder women in most gruesome ways and are very expressive of their sexual desires towards women (“enakku ava venum” (“I want her”) sort of dialogues). I do not get this. If I am being dense, someone clarify this incongruence to me.

The whole idea of getting these two men raped by a transsexual (male to female) is horrific and grossly insensitive. Of course, Raghavan (Kamal’s character) later mildly chastises the police officer responsible for this. That does little to set right the damage that they have done to the image of Aravanis.

Let me make my position clear. I am not saying that a gay man can never be a psychopath or vice versa. I am not saying there might be no sex-worker Aravani who ends up having to please policemen or other powerful clients of hers. My objection and protest can be put this way:

As a student of literature and as a performer, I understand that character representations largely fall into two kinds: individualized personas and, what we call, types. In the first kind, the character, the mannerisms, the entire personality come through as one unique individual who does not bring to mind someone we have met in flesh and blood or in a book, play, film etc. In the second kind, the types, the character can be abstracted into something that represents a type of individual. It enables us to relate him/her to someone else. Of course, the boundaries between these two keep blurring. That is what makes writing, acting, directing, performing and even reading challenging. There is a danger that these two villain characters in this movie become types. I will not be surprised (but definitely hurt and upset) if the names “Ila” and “Amudhan” acquire homophobic references in popular Tamil college lingo. If “Chiyaan” can happen, this too can happen.

Of course, Tamil cinema has a general record (for people who notice it, that is) of trafficking in astoundingly abysmal portrayal of women. This movie is no exception. In Kamal Hassan’s movies, women as a rule, are little more than sex objects. But even when the Raghavan (Kamal) – Aaradhana (Jyothika) relationship is shown as blossoming as a mutually-respectful good friendship from the beginning, it is not devoid of patriarchal ideas of possessing and protecting women – (“Neeyum Maayavum en sotthu” – “You and Maya (the child) are my possessions, property”). Also, totally uncalled for, abusive references to “Ungamma…” (“Your mother….”) while talking to the villains. There were so many such utterances that I saved in my mobile phone!

And friends who think I am overreacting, No, I am not. I am only reacting to something that needs to be reacted to.

Aniruddhan Vasudevan is a performer, writer and activist from Chennai, India. He is passionate and vocal about issues around gender, sexuality, social justice, and human rights. Aniruddhan is a founder of The Shakti Resource Center, a non-profit set-up working to further the discourse on these issues.   Writings in English - தமிழ் படைப்புகள்