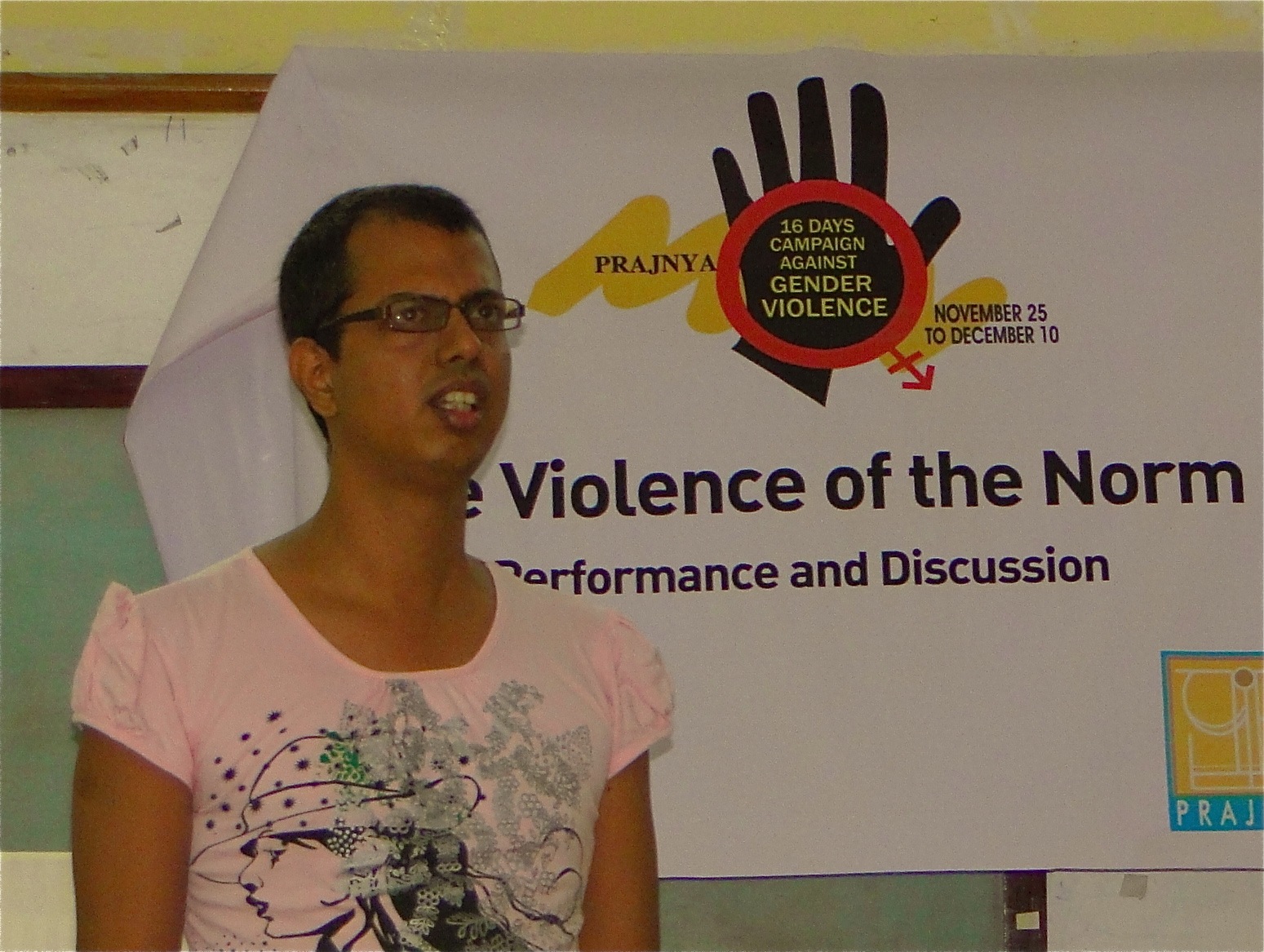 Now that I have actively participated in online and offline discussions in Orinam/MP for nearly six months and worked together with the core team to organize at least a couple of events, I feel I can share my story. This is a brief narrative of the 35 year journey that has led me into LGBTQ activism here in Chennai.

As a child, I felt that the pressure on girls and boys  to participate in different activities, sit separately, and dress differently was an intolerable apartheid, but I could not bring myself to protest against it. I was actually so scared of ragging that I even avoided going to college, but never openly spoke out against bullying. Even while playing with toys as a child, while to most children around me, the only family our toys could have was a Mom and Dad with one or more children, I saw no reason why a family couldn’t be set up differently: two Dads, two Moms, or maybe even Two Moms and a Dad in one family. However, I was afraid to insist that others accept my definition of family even as part of a play activity.

As a teenager, I never liked playing the so-called boys’ games, and was not always allowed to join the girls’ games, so I spent a lot of time with what were then my best friends: shortwave radio and books. Internet access was not affordable for us at that time. I hated television because I found the mainstream programming based on patriarchal norms and heteronormativity intolerable – of course I did not know these words then, but the concepts were all too familiar. While my family members and friends had their own favorite TV shows, I spent most of my time listening to documentaries, including those on gender and sexuality, from Radio Netherlands, BBC, Voice of America, and Radio Canada International. I remember there was a presenter in Radio Netherlands called Maggie – I don’t remember her last name – who did a series of documentaries on commercial sex work, same-sex marriages, etc. She was my favorite media personality (I never had/have a favorite cinema actor) because she, through her radio presentations, affirmed for me that my ideas of life were acceptable. Unfortunately, I was unable to relate or talk to others at school or my neighborhood because their lives revolved around TV, mainstream sports, and political news, and they did not understand the world I inhabited.

As far back as I can remember, I have had the same ideas: that gender should not be imposed on anyone, that people must be free to relate to each other irrespective of gender, and that it is wrong to morally police others. Had someone had asked my opinion on the rights to equality and against discrimination for LGBTQ people, I would have answered similarly even ten or twenty years back, but until recently, I never had the courage to publicly speak out. I felt elated when I read the Delhi High Court judgment in 2009, even though it had no direct personal impact on my life –  I have not explored sexual relationships or even had a crush on a man to date. Back in 2009, I  knew no one I could speak with about queer issues, yet I celebrated the significance of that momentous judgement.

Reflecting on my childhood and early youth, I do not think my being silent on these issues was related to fear of parental disapproval. I have made my own choices through my life, and did not take any advice when it came to deciding what subjects to study in high school. I spent a few years in an Ashram (religious institution) against the advice of my parents and most of my relatives. So, what made me remain closeted about my support for LGBTQ issues? Maybe the general reticence to discuss gender and sexuality topics, and my fear of being bullied, prevented me from publicly stating my stand on these issues.

My status as a silent supporter changed last year.  I attended some Pride events including queer film screenings and and talks organized by Orinam in June 2013. When I met the group, I felt as if I was transported to a different society altogether. For the first time, I found validation in  meeting a group of people who shared similar ideas on the right to choose one’s gender and the right to be with the person you love without being harassed by society. I was like a child, lost in a forest at birth, brought up by some crazy creatures (such craziness is not normally seen in the natural animal kingdom), who had somehow learned to read and had read books about advanced civilizations, heard a few documentaries on radio, but never had a first hand experience of what it means to live in such a civilized city. Now, suddenly I find a group of people living in such a city and willing to offer me a home there. That is what Orinam is to me. It is natural I continue to hang around with my new-found friends through Pride and other events, and through both good and bad times (377 verdict).

Life remains a journey. Until now I was wandering around with  no clue where I was: all I heard was crazy voices whose messages I could not decipher. Now, I feel I am on an automobile with cruise control traveling on a freeway with people who are not only skilful drivers but keep you entertained during the journey.

Finding a supportive community and growing into LGBTQ activism means several things to me.  I now have the courage to state that I am Gender Fluid without fear of being harassed or ridiculed, and with the confidence that I have friends who accept me for who I am and will support my right to live a life that is true to who I am. On occasion, I feel I can experiment with a different style of dress, I can talk or act in an Orinam program to express our views on gender rights, and I publicly share Facebook updates supporting LGBTQ rights. This is possible because I realized that no one can take away our right to choose to live our lives authentically, even if we are considered  a (“minuscule”) minority at this time. We have real (not “so-called”) rights that cannot be taken away by anyone, not even the highest judicial or legislative authority in the country.For those of you who know me or are already active in the community, I just want to say I am extremely happy to be associated with you all and look forward to our victory. One day, I hope, we should be able to achieve equality for all and we won’t have a need to work on LGBTQ rights anymore. I am not that optimistic to think all social problems will go away, but I hope sometime within our lifespan we should be able to create a world where discrimination based on gender and sexuality are extremely rare.

For those on the fence, wondering if you should get actively involved in promoting LGBTQ rights, I am not going to advise you to come out as an activist and join the battle. I am not campaigning to recruit more foot-soldiers for the cause,  but just sharing my perspective and letting you know how happy I am that I can now openly state my stand on the rights of gender and sexual minorities.  I would never criticize someone for not joining the struggle for LGBTQ rights. I understand all of us have different priorities, and actually admire how some of my Orinam friends are able to manage time for community activities in addition to their professional and personal commitments.

If you feel encouraged to share your story of working with Orinam or if you feel like coming and attending the next event just to see if you want to get involved in offline activities, you are welcome to do so.  From my experience I can say that one can find support here, and no one here is going to force anyone to come out or to engage in activism. That is the reason I feel at home with Orinam.

Delfina is gender-fluid and envisions a world where everyone is free to express their sexualities and genders the way they choose to, without being stigmatized. S/he has volunteered with Orinam since mid-2013.