Tara, a 28 year old trans-woman in Chennai, was found with 90% burn injuries near the Pondy Bazaar police station. On the morning of November 9, she succumbed to her injuries and died at Kilpauk Medical College hospital. According to the, police, it was a case of self-immolation but the matter is still under investigation.

Gender rights activist and members of the LGBTQ community came together under the banner of Delhi Queer Pride banner, for a protest vigil for Tara, which took place at Jantar Mantar on November 14.

Dhrubojyoti, journalist and activist based in Delhi, addressed the protestors in New Delhi saying that Transgender persons just like other oppressed groups like Dalits or Adivasis or homeless persons, have been bearing the brunt of police violence. “LGBTQ persons, like me, with the privilege to move around in cars, who are not homeless, who do not beg or engage in sex work as a means of sustenance are the ones who are tolerated by society if not accepted entirely.” It is working class trans persons like Tara who are oppressed by the hetero-patriarchal structures of society with aggressions amounting to physical and sexual violence and even death.

Tara, like lot of other trans-women, was a sex worker. Does that dilute her right to live with dignity? The police harassment meted out against her was under the garb of her being a sex worker. Before she died, she faced torture at the police station where she was told by the police “to go out and die as nobody will mourn your death”.

Whether Tara was killed or forced to kill herself, we are still to find out.

But why is it that we need a death to evoke empathy and agitate? Oppressed groups have been constantly brutalised by the state and society, but it is only when someone dies, that our blood boils. Women get raped and molested almost every day in India, but we needed a Nirbhaya, to take to the streets and demand accountability from the state. Agitated at the apathy of state and society towards oppressed groups, Bittu Karthik, scientist and activist, said, “Tara and a lot of trans-women and sex workers have been harassed and abused. But nobody takes these incidents of aggression seriously. Tara was killed by the same oppressive forces. Maybe we need a death, a murder.”

“Recently in Hyderabad”, said Karthik, “There was a spate of attacks on transgender sex workers by a group of men to extort money. Even after a number of FIRs and constant pleadings with the police, there was no action taken. It was only when one of the trans-women was killed by this group, that people started protesting and police arrested the men. It is just how public sympathy and attention works. We strive to provide retrospective justice to the ones who died under oppression by forces that we did not combat.”

It is important for us to understand the relationship of marginalised communities and police violence. The widespread impunity with the police to harass, curtail and control certain identities is the reason for Tara’s death. Even after the landmark judgment in NALSA v Union of India, oppression and violence towards trans* individuals continue. 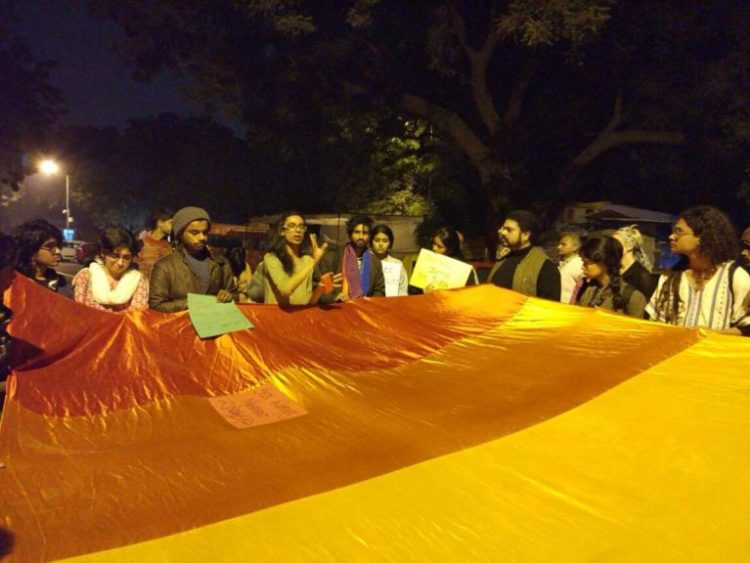 Members from Pinjra Tod, a feminist movement against patriarchal domination of public spaces, expressed their rage towards Tara’s death saying that our patriarchal societies permit only certain kind of bodies – the male, able-bodied, upper class- to enjoy public spaces  like the streets at night. The ‘other’ bodies- women, trans persons – are subjected to suppression and violence as a measure to control those bodies and limit them to a certain periphery. “Dignity of women is attached to their choices of clothing and the time of the night they take to the streets. We are told that it is only bad women who go out at night and then they are subjected to violence, which they presumably asked for. Tara’s death is an example of this narrative.”

Birsa Ambedkar Phule Students’ Association of JNU expressed their solidarity and rage towards the incident and condemned police violence towards trans-persons saying, “It is a reflection of the patriarchal, brahminical society that oppresses every disadvantaged group to maintain this status quo. We must resist such acts.”

Shambhavi, member of Dhanak – a student led LGBTQ collective in JNU, expressed her rage towards such ‘dispensable’ identities by citing instances of micro aggressions on campus where students deal with discrimination on a daily basis. She also cited the case of Najeeb and the apathy of the institution towards the case.

While we express our agitation and resistance towards these acts of violence, we must also resist and challenge the institutions that perpetuate these forms of violence. In a hyper-masculine, patriarchal society that is bifurcated on the lines of class, caste and gender, these acts of violence are mere expressions of a much larger problem. Vqueeram, activist and professor, articulated the pain and anger of Hijra and Thirunangai individuals by addressing the structural injustices on these identities every single day so much so that it becomes a matter of life and death. “When people say Hijras are in-betweens, I think they are- in between life and death.”

“The narrative is such that is acceptable that certain lives are dispensable,” said Dhrubojyoti.   “Let us not find novelty in violence and choose to fight only when someone has died. Is it that we are angry only because Tara was burnt alive? Are the acts of violence against marginalised groups every single day not moving enough for us to stand in solidarity?”

Republished from TheWire.in with consent of the author.

Ajita Banerjie is a researcher on gender and sexuality in Delhi.