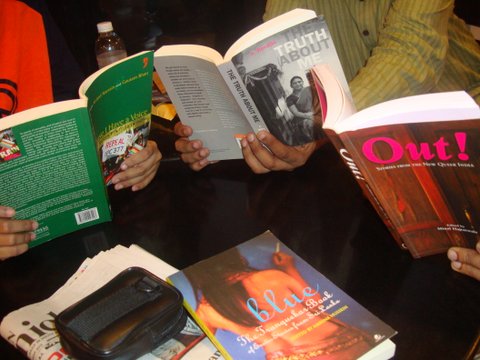 Orinam’s Quilt, the reading group of Orinam, meets at Zha Cafe, Adyar, on Saturday, Feb 23, 2013, from 4 pm to 7 pm. The theme of this reading is love and romance. Bring your favorite queer-themed or otherwise relevant fiction/non-fiction/poem and share with the group. If you are on Facebook, you many confirm your attendance on the event page.

Background:  ‘Quilt’ is both an acronym for Queer(ing) Literature, and a reference to Ismat Chughtai’s short story Lihaaf (the Quilt) which was published in 1941, considered a milestone in queer writing from the sub-continent.

Quilt is an addition to other existing queer literary efforts in Chennai, such as the LGBT writing workshop series led by Vanavil Foundation.

Some of the discussion points from the inaugural meeting OQ held in T Nagar on Saturday, December 1, 2012 are:

If you are not part of the Orinam/MP mailing list and would like to be part of the reading group, you may check out announcements on the Facebook page or leave a message for us.