On the evening of Friday, March 2, 2018, Coimbatore saw the public screening of ‘Ladies and Gentlewomen’, a Tamil documentary film. Directed by Malini Jeevarathnam and  produced by Pa. Ranjith’s Neelam Productions, ‘Ladies and Gentlewomen’ is the first effort in the history of Tamil cinema to break the silence around the dynamics and body politics of lesbian relationships, which are often socially stigmatised. Also screened were ‘En Aasai En Kanavu’ and ‘Won’t the Real Transformers please stand up?’, two short films on the lives of transmen and transwomen.

These screenings were organised by Queerbatore, a collective formed in 2015 by a few individuals who were part of the Orinam mailing list and network. Queerbatore is now an active WhatsApp group and offline space for people belonging to the LGBTQIA+ community who either live in Coimbatore or have a personal/professional association with the city.

The event commenced with a song rendered by Shyam, a volunteer of Queerbatore.

The song was followed by the screening of Malini’s film.

Post-screening, Vivek Kumaran gave an informative presentation on gender and sexuality to make the audience aware of LGBTQIA+ terminologies. Vivek also urged the audience to  be sensitive, respectful and accepting of persons with diverse identities and to address them by their preferred choice of pronouns. 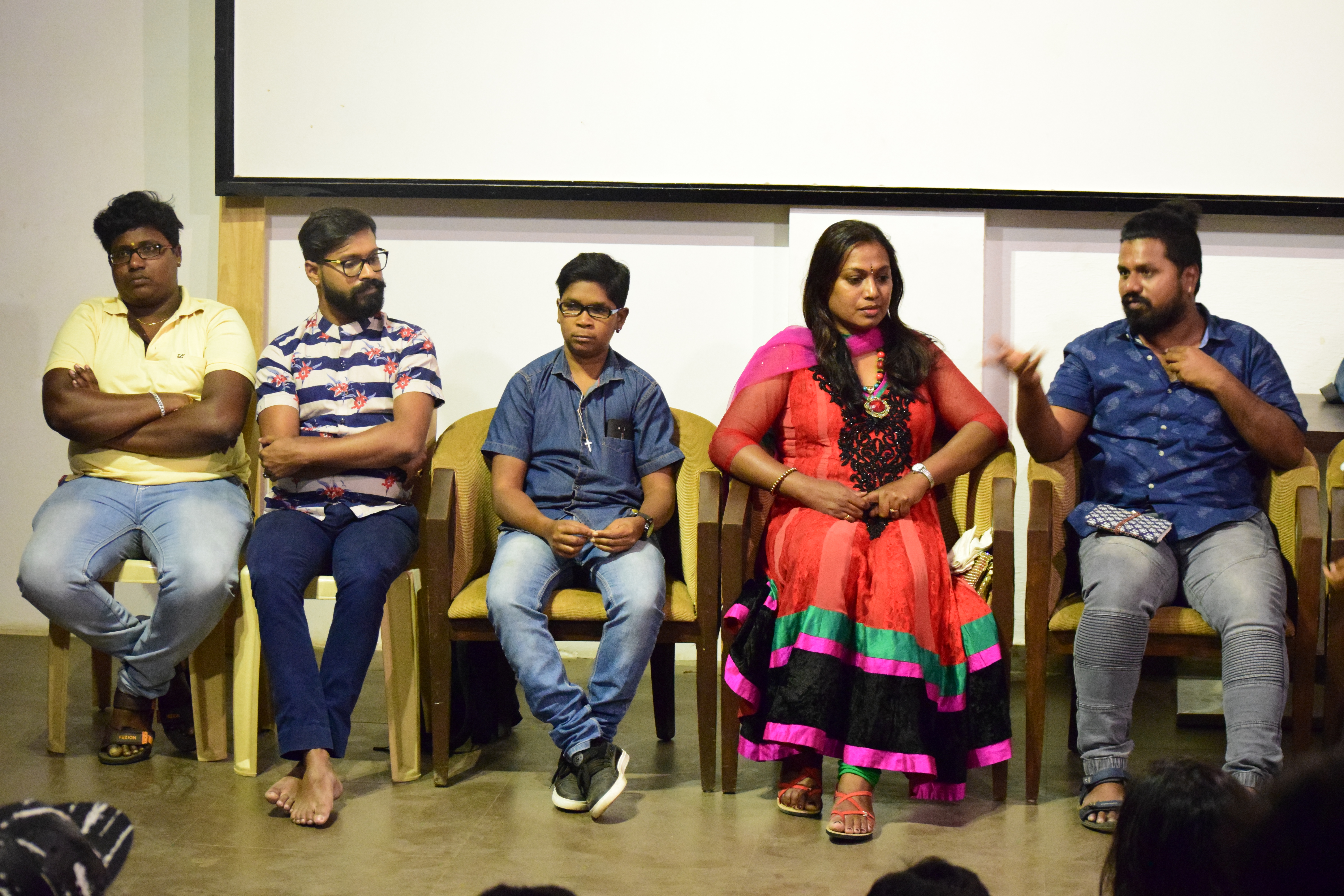 Representing the transwomen, transmen, intersex, lesbian, gay and ally communities, these panelists come from different walks of life. What they have in common is their extensive and passionate work for the welfare of the LGBTQIA+ community through their engagement with art, theatre, film, media, activism, advocacy and life.

The intention of this interaction between the panelists was primarily to make people within and outside the community aware of the diversity of identities that exist under the LGBTQIA+ umbrella. Kalki, Srijith, Malini, Selvam, Saurabh and Vinodhan passionately spoke of the challenges, breakthroughs and experiences in their personal and professional circles. The audience was also encouraged to accept whoever they feel they are and to live without the fear of anyone.

Most of all, this event was an Out and Loud call to people from all sections of the society to stand up and unite against oppression on the basis of sex, gender, caste, race, appearance, personal choices or, for that matter, violation of any human right. Injustice anywhere is a threat to justice everywhere.

In the video excerpt below (courtesy Prasanth), Kalki speaks about gender stereotypes within the community, followed by a discussion with Srijith on queer history and intersectional activism.

Thanks to the Queerbatore volunteers who shared the images above.

Shivein is a nomadic seeker of love, companionship, silence and rest.