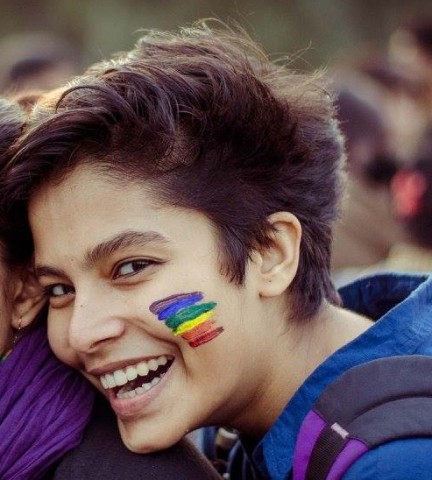 January 16,  2017: Asmita Sarkar, 19, a second-year undergraduate student of sociology at Jadavpur University, is contesting the upcoming student elections on campus as a representative of the All India Students Association (AISA). A candidate for the position of Assistant General Secretary, Arts, Asmita is perhaps the first out queer ciswoman to contest student elections in India*.

Asmita came out to herself at age 12, while a student in her hometown in Bardhaman. Growing up, she internalized prevailing notions that homosexuality was unnatural. “But later when I started gaining more and more knowledge, I started understanding and getting my identity clear”, she says.

A national-level badminton player and photography enthusiast, Asmita has been actively involved in campus activism around gender-based discrimination.

When asked about her decision to represent AISA, she said “AISA gave me a platform to uphold my identity in front of the students of JU”, noting that Left parties had, by and large, responded positively to LGBTIQ+ issues. Incidentally, the first reported out LGBTIQ+ candidate, JNU’s Gourab Ghosh, also contested as a Left party candidate in 2013.

As a key election issue, Asmita is championing the cause of LGBTIQ+ acceptance in society, both on- and off-campus. She wants to counter myths that same-sex desire and transgender identities are unnatural, and to mobilize public opinion against Section 377 of the Indian Penal Code. She strongly feels that basic sex, gender and sexuality education, including LGBTIQ+ issues, should be given to school-going students. She asks that admission in educational institutions be accessible to all, based on their aptitude, with no discrimination based on gender identity or sexual orientation.

Asmita said that JU is relatively LGBTIQ+ friendly as Indian university campuses go, and she has not personally faced any problem on campus due to her identity. She noted that transgender people face much more difficulty. She also questioned the prevailing practice of marking all transgender people as “third gender” on admission forms, a category that not all identify with.

Other issues in Asmita’s election manifesto include proper functioning of the Gender Sensitisation Committee against Sexual Harassment (GSCASH) on campus, and 24×7 availability of sanitary napkin vending machines in all women’s restrooms.

Her accomplishments notwithstanding, Asmita has a long way to go. She is not yet certain about the profession she would take up in the future. Her parents still do not accept her. “I still need to struggle with my family and in neighborhood to [get them to] cope with my identity”, she signs off. 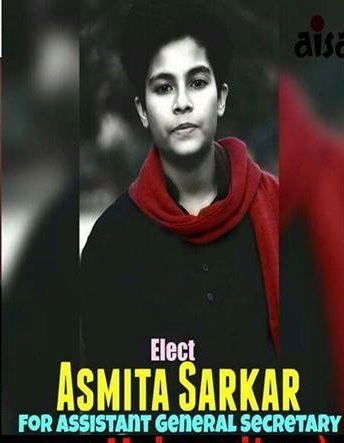 * Readers: please let Orinam know if there have previously been any other out queer women students contesting campus elections in India.

A comprehensive list of Orinam blogposts on educational institutions and LGBTIQA+ issues is at http://orinam.net/resources-for/educational-institutions/from-the-blog/.