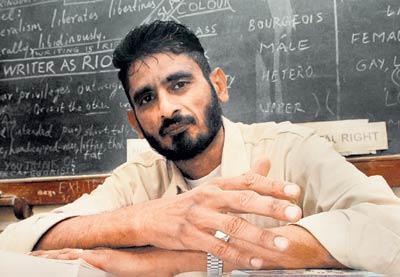 Noted writer Raj Rao from the University of Pune has been invited to Chennai by the Prakriti Foundation. His reading engagements are as follows:

R Raj Rao was born in Bombay, India. He studied in India (PhD in English
from the University of Bombay, 1986) and received the Nehru Centenary
British Fellowship for his post-doctoral research at the Centre for CaribbeannStudies, University of Warwick, UK. In 1996, he attended the International Writing Program, Iowa. He is the author of Slide Show (poems), One Day I Locked My Flat in Soul City (short stories), The Wisest Fool on Earth and Other Plays and Nissim Ezekiel: The Authorized Biography. He has also edited Ten Indian Writers in Interview and co-edited Image of India
in the Indian Novel in English (1960–1980). A professor of English at the
University of Pune, Rao is also one of India’s leading gay-rights activists.
He has traveled extensively, to read from his work and conduct writing
workshops, in several cities in different parts of the world.

Six poems from Rao’s BomGay collection were the basis of Riyad Vinci
Wadia’s path breaking film – BomGay (1996), India’s first gay film. The
Boyfriend is Rao’s first novel and the first gay novel from India. It was
released with fanfare by Penguin India all over the country in 2003 and
acclaimed as one of the year’s finest books. Full of irreverent, dry humor
and devoid of sentimentality, the novel is a tragi-comic love story from
the jumbled up heart of Mumbai. In the process, it also examines with
unsparing irony the realities of caste, class, religion, masculinity and the
gay subculture in India.