We, the members of Telangana Intersex Hijra Transgender Samiti of Hyderabad, request your solidarity in our fight for justice in this transphobic world.  After forty brutal attacks with knives and rocks on almost sixty transgender women in Hyderabad in the last year, our sister Pravallika was murdered in one such attack.  In the midst of our outrage over police inaction and complicity in her murder, another Hijra sister was picked up by the same KPHB station police claiming to investigate the murder and was stripped and tortured for hours.  This police brutality must be fought.

Join us in Hyderabad at Sundarayya Park, Baghlingampally at 5 pm, 24 January 2015, to protest and fight for justice. Please note change of venue from the previously proposed OU.

If you live outside Hyderabad, please organise solidarity demonstrations in your city.

Only a multitude of voices can combat the transphobic brutality faced by working class trans people on a daily basis.

Below are our statements on the murder of Pravallika and the sexual assault of the other Hijra sister.

We, the members of the Telangana Intersex Hijra Transgender Samiti, denounce the dastardly acts of transphobic violence that led to the gruesome murder of Pravallika, our sister transgender in the wee hours of Saturday, 17th January 2015.

Transphobic violence has been on a steady rise in the recent past.  We, the Transgenders and Hijras, who are largely shunned by mainstream society, have no source of employment and livelihood.  We don’t get jobs even if they were to try hard and the fact is that NO ONE gives us jobs.  This fact is abundantly acknowledged by the apex court of the land in its NALSA Vs. UOI judgement.  We are consequently forced to live off beggary and sex work.  Despite the recent NALSA judgement of the Supreme court of India on 15th April 2014, the living conditions of Transgenders remain deplorable and sub-human.  No steps were taken to ameliorate the lives of Hijras and Transgenders despite the judgement of the honourable Supreme court.  Time and again, transgenders have been violently attacked in both Cyberabad and Hyderabad across police stations.  Despite our complaints across these police stations, action wasn’t taken till date to bring the perpetrators of violence to justice.

Over the past few quarters, Hijra sex workers have bled having been pelted with sharp and large stones, thrashed on their heads with beer bottles, stabbed and slit with sharp knives on their limbs, faces and genitalia and have been robbed of their hard earned income and savings.  Our homes were ransacked and our hard earned savings and valuables stolen.  We were harassed and publicly humiliated in our homes and neighbourhoods till extortionists obtained money from us.

Pravallika was born in a remote village of Telangana from a very poor back ground.  She always identified herself as a transgender and faced an enormous amount of stigma in throughout her lifetime.  She was a confident graduate with no opportunities and was constrained to eke a living out of beggary and sex work.  Despite all such odds, Pravillika was known by her friends as cheerful, positive and a vibrant transwoman.  Her life would not have been cut short if only the state and the police had acted on the complaints of Hijra and Transgender people and in time.

This case of ghastly gruesome murder of Pravallika is the culmination of the callousness and apathy of the state and the police.  We demand that the following at the earliest:

SEXUAL ASSAULT OF A HIJRA SISTER:

On the evening of Tuesday, 20th January 2015 i.e. yesterday, our friend, a Hijra sex worker was taken away for interrogation to the KPHB police station.  She is a colleague and friend of the late Pravallika and is also our friend.  On the pretext of interrogation, the police blamed her for conspiring to murder Pravallika and resorted to sub-human methods.  The police caught her while she was returning home from her hot spot and confiscated her mobile first to ensure that she couldn’t contact anyone for help.

Barely three days before this incident, the police had themselves urged her in our presence at the Gandhi hospital mortuary to continue going to the hot spot.  We were a minimum of twenty people who witnessed this request from the police.  They said that they suspected that Pravallika may have been murdered by her clients and hence wanted to use our Hijra friend as a bait and a decoy.  Despite this, she was treated like a criminal, DENUDED by policemen with the alleged reason of “checking whether or not she was really a transwoman”.  She had to remain nude for 4-5 hours as they manhandled and tortured her, questioning her transidentity all through, as she was uncastrated.  She told them that transidentity cannot and should not be restricted to a person body or be reduced to one’s anatomy as enshrined in the NALSA judgement but the police demonstrated total disregard for the NALSA Vs. UOI judgement of the Supreme court.

Naked as she was in the biting cold of a wintry night, she pleaded for her clothes but they couldn’t care.  Finally, with no other option left, she was constrained to reveal her HIV+ve status and explain that she is highly vulnerable to infections and that she can’t afford to be nude for so long in such cold weather.  Sadly, that too fell on deaf ears.  This only resulted in them keeping a safe distance from her having masked their noses and mouths but they didn’t return her clothes to her.  Our sister transgender is very ill now and struggling with the consequences of this torture.

Pravallika’s mobile is now on surveillance after her death.  Preliminary investigations revealed that some police personnel were in touch with her before her murder.   They claimed to be “just her friends”.  It is nothing new that the policemen who harass and torture Hijra people often seek free sexual favors from them and call themselves “just friends” when found in such compromising situations.   With this coming to light and the unusual urgency shown by the police to paint this case as an “intra-hijra feud leading to Pravallika’s murder”, the very role of the police appears suspect and perhaps complicit in this crime.

In addition, police have called other members of our Samiti, asked for sexual favours and asked intrusive questions about our genitals amounting to sexual harassment.

As much as we would like to and wish to, we ARE NOT ABLE TO TRUST the police anymore and demand that the following at the earliest:

Below is the copy of the complaint filed to Deputy Commissioner of Police, Cyberabad, by S, the hijra woman who was assaulted by the police. Click to enlarge. 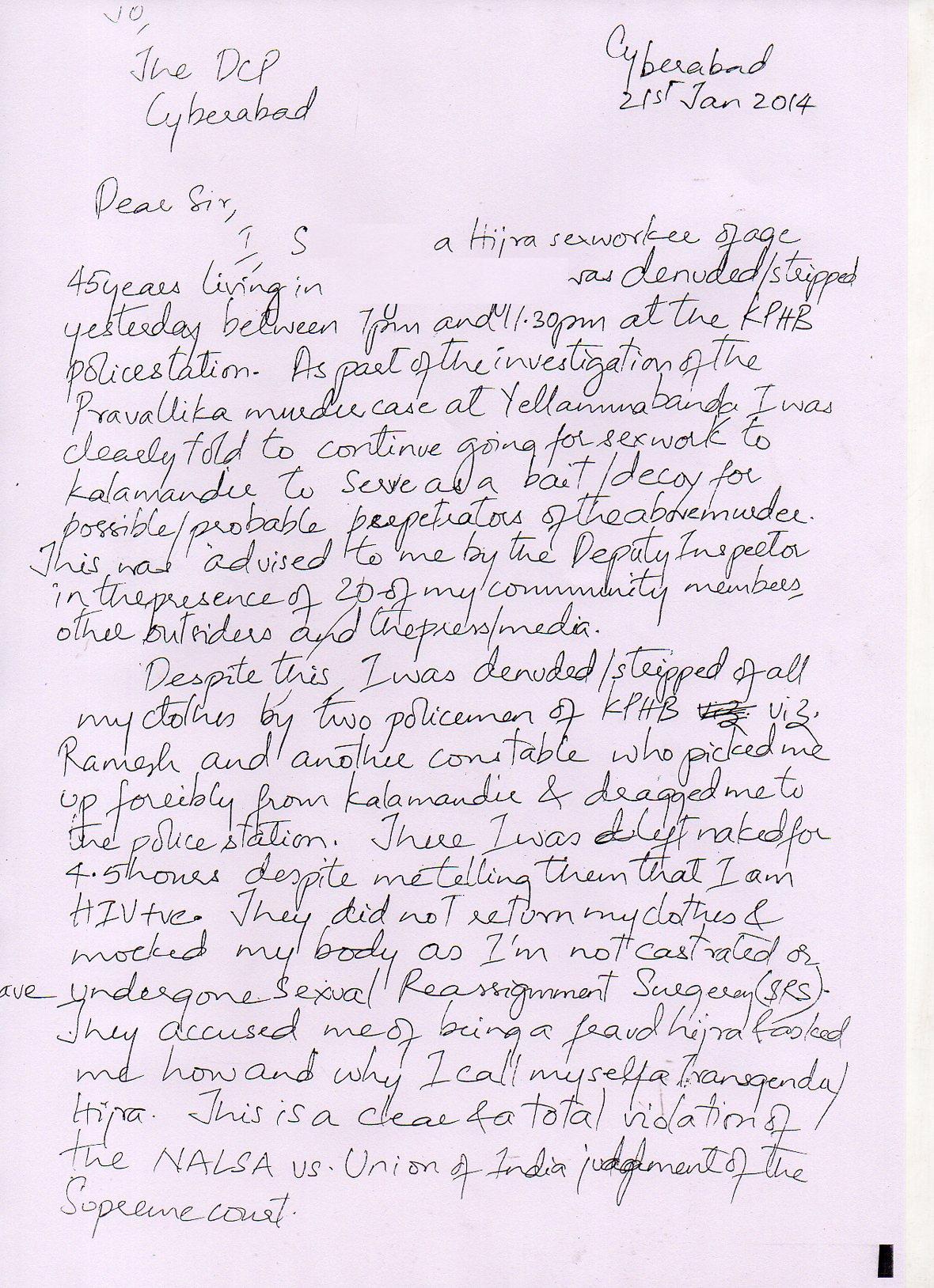 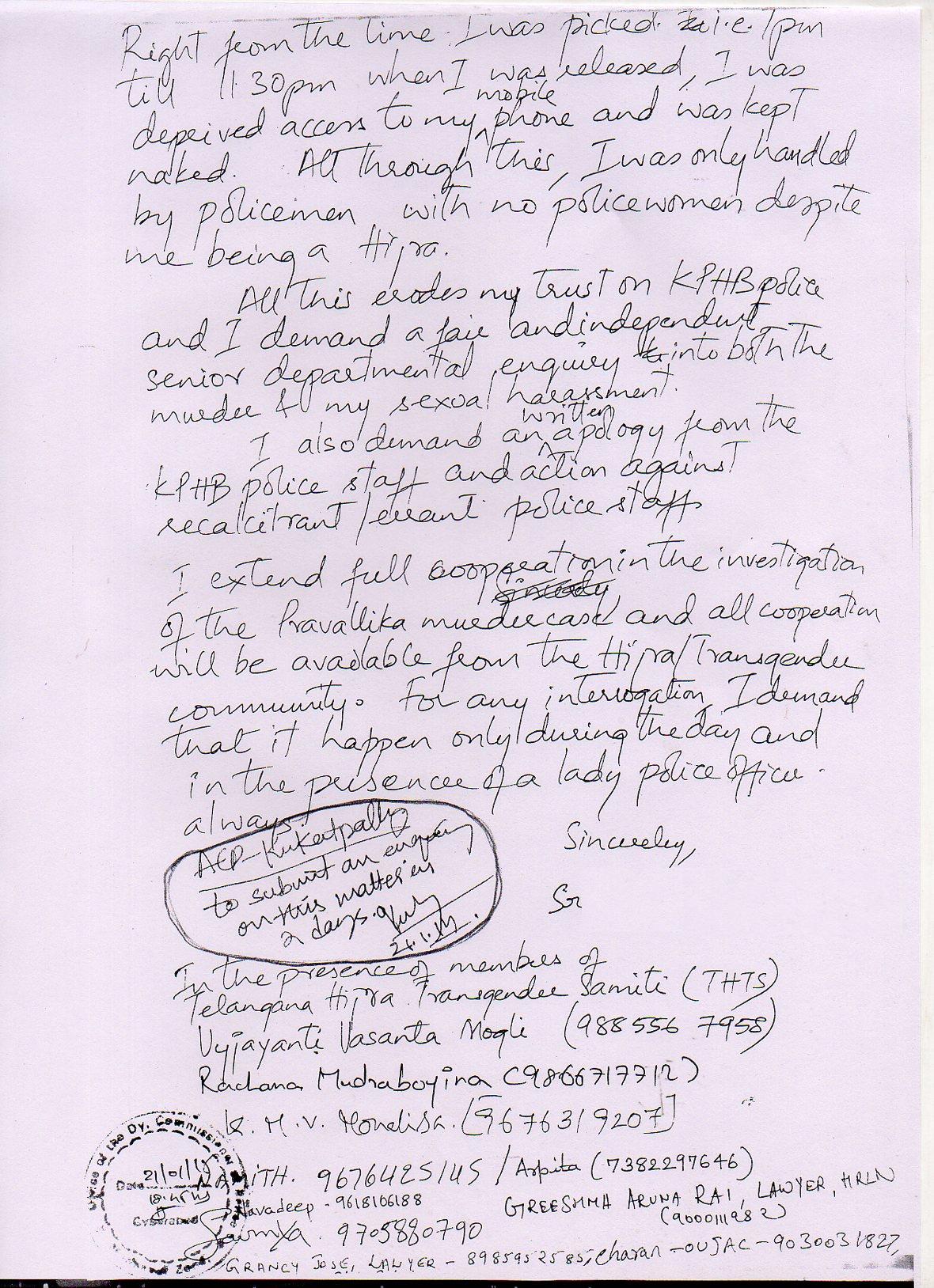