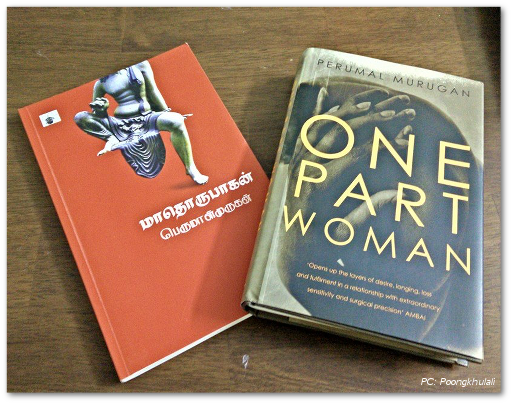 We at Orinam add our voices against the call for banning the critically acclaimed Tamil novel Maadhorubaagan (மாதொருபாகன் – Kalachuvadu, four reprints) by Perumal Murugan, translated in English as One Part Woman (Penguin, two reprints). The book has become the target of opposition from some fringe right-wing political and caste outfits. Calls for arrest of the author and ban of the book completely contravene the author’s constitutionally guaranteed right to expression.

Titled after the Tamil name for Ardhanarisvara, the androgyne form of Siva, this book refers to a practice believed to have been associated with the temple festival at Thiruchengode, in the Kongu heartland of Tamil Nadu.

However, that is not half as interesting as what we have observed in the book. In this piece of fiction, we note that the author has queered ideas of conventional masculinity and femininity. The story is that of a loving couple, Kali and Ponna, who is childless. Kali, the lead male character, is shown to fail in the all too essential masculine ideal that is constructed around him. Ponna, the lead female character, steps away from the sexual conventions of femininity as she chooses to go beyond the ritual of faceless sexual intercourse seeking a child: she exercises agency in choosing who she wants to sleep with, the handsomer god. The book also queers divinity. It constructs interfaces between woman–discerning, and strong–and the god; between man–casteless, and kind–and the divine. It jolts us into rethinking what that mundane phrase ‘God gave us this child’ many of us have heard, may actually have meant.

Opposition to this book appears to be part of a sanitisation drive spearheaded by the same vigilantes that justify misogyny and homophobia, and erase alternate sexualities and non-binary gender expression in the name of preserving their version of culture and tradition. We feel that the prime motive of such a drive is to remove the book from public consumption, notwithstanding the author’s offer to remove the name of the town from future editions. As a progressive collective that battles against the same moralistic notions that seek to invisibilize alternate sexualities, reinforce patriarchal gender identities and norms, and suppress the freedom of expression–whether sexual or literary–Orinam stands with the author, the publisher and the translator as this unfolds.

We gather that Perumal Murugan has publicly retracted his work. While we would very much like the author to reconsider his decision, we respect the struggle he has gone through, and understand that this was a decision made after much introspection. However, we wish to state that the book will live on. It will be consumed. We have copies of his book in our libraries. We will not burn them. The book will be read and discussed in private and public, including through events and occasions that we organise and participate in.

← Previous post
A year of action against Section 377 in Tamil Nadu since the 11.12.13 verdict
Next post →
Smiley’s Open Letter to Director Shankar