This is a summary of a speech delivered by Mr. A. Kumaresan on the occasion of a protest meetialng organised by Nirangal urging the TN government to take initiatives to read down Section 377. The event was held at Valluvar Kottam, Chennai, on 13 September 2014, and was supported by the Tamil Nadu Rainbow Coalition and Sangama. Mr. Kumaresan is member of the Tamil Nadu Progressive Writers and Artists Assocation, and editor-in-charge of the Chennai edition of Theekathir, official newspaper of the Communist Party of India CPI(M).

This article was translated to English from Tamil by PT. 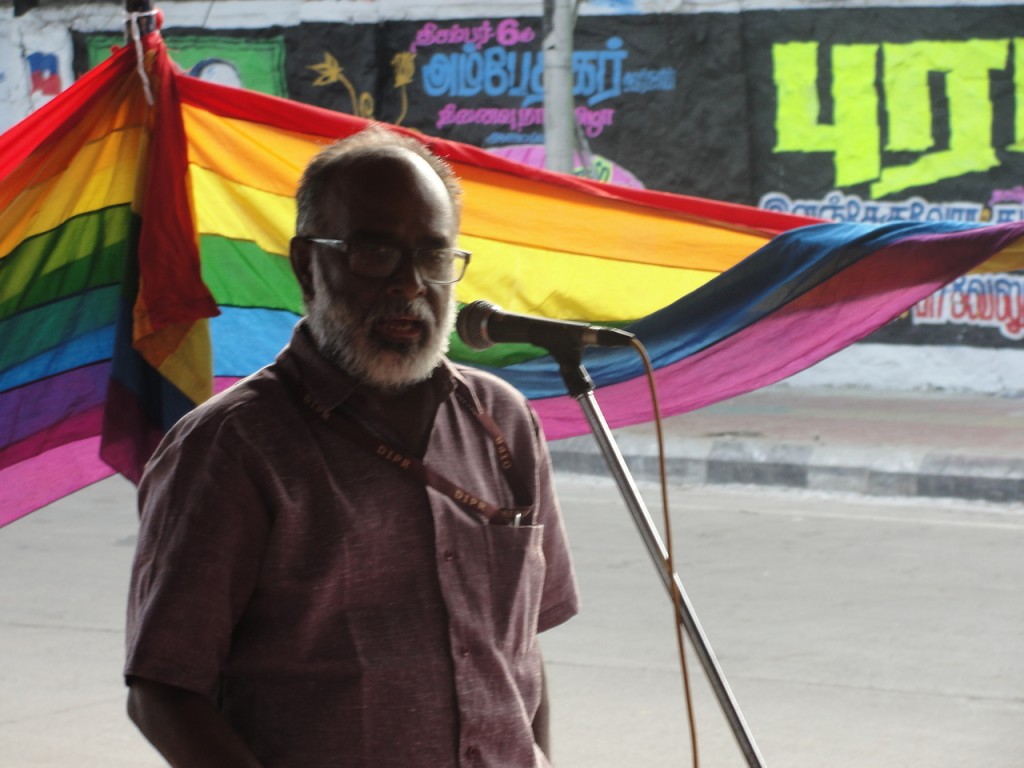 In 2009, the Delhi High Court had ruled that Section 377, that treats allegedly-unnatural sexual acts as criminal offences, is unconstitutional and recommended its reading down. But, the Supreme Court  quashed this earlier verdict in 2013, ruling that Section 377 did not suffer from constitutional infirmity. The SC went on to recommend proper action through the Legislature.

Hence, your protest against Section 377 should now be directed towards the Parliament.

You must realise, however, that the Parliament we have today is not going to accept your request and work towards reading down the section that easily. Your struggle is not going to result in victory without difficulty. There have been many such protests by civil society that have been unheeded by the government.

When Dr B. R. Ambedkar, who was the Chairman of the Constituent Assembly that drafted the Indian Constitution, was India’s Law Minister, he drafted the Hindu Code Bill that mandated equitable property to women in the succession law. When opposition against this provision mounted, arguing that this amendment to existing rights was against our cultural ethos and tradition, Ambedkar was prepared to resign. One cannot expect such determination for your cause among the legislators of today.

Hence, you must strengthen your protest and work towards consolidating this determined struggle. An MP from the BJP, supported by a Hindu organisation, had appealed against the High Court verdict. Soon a Muslim organisation and a Christian organisation joined in support for this appeal. You must therefore understand that any religion, be it the one where you prostrate on the ground or the one where you kneel to worship, is against human rights.

Similarly, same-sex relationships are also natural. Not understanding this is the problem. Let us keep reiterating these facts to raise public awareness on alternative sexuality.

This article was translated to English from Tamil by PT.