A previous post had summarised the work done as of December 13, 2015, towards supplying provisions to transgender people affected badly by the Chennai floods, and contained an appeal for donations to continue the work.

THANK YOU everyone for the tremendous support, including monetary and in-kind contributions, spreading the word, and good will that came our way in response to that appeal. This support continues to fuel our contribution to this relief effort, and is helping us scale it up to meet previously unidentified needs.

The previously set target (170) of provisions has been met.

Dec 15: the provisions earlier sourced were distributed to 41 transwomen identified by Sankari and surveyed jointly by Sankari and Jaya in Thiruvottiyur (16 in Netaji Nagar and 25 in Kargil Nagar). In the following days of the same week, two transmen were handed over sacks of provisions.

Dec 19: With the enthusiasm borrowed from the above successful effort, an order for a further 65 sets of provisions was placed for distribution to Ezhil Nagar, Saidapet and T. Nagar. Of these areas, Saidapet and T. Nagar were not listed in our previous post: individuals were identified there only subsequently as having immediate needs.

Dec 22: These sets were distributed to 20 kothis from T. Nagar and 20 thirunangais from Saidapet who had been identified in a survey by Siva. From there, Siva and I went on to distribute relief to 20 transwomen from Ezhil Nagar. The estimate was initially provided by Anjali and Ponni to Ramki and Sankari. Subsequently the individuals were met in the field by Siva. In Ezhil Nagar, we also identified two ciswomen neighbours whose homes were badly affected. Siva suggested supplying two sacks to them, and requested the transgender women to distribute the provisions to these two households: a move that he felt would help strengthen their relationship with their non-trans neighbours. Thus, two of the provision sets in Ezhil Nagar went to non-trans beneficiaries. 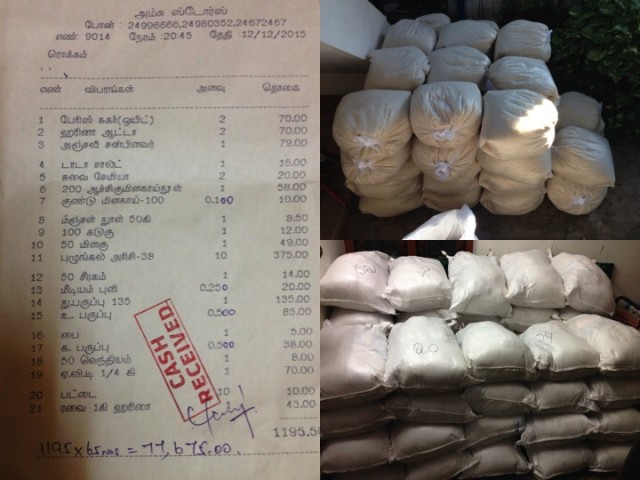 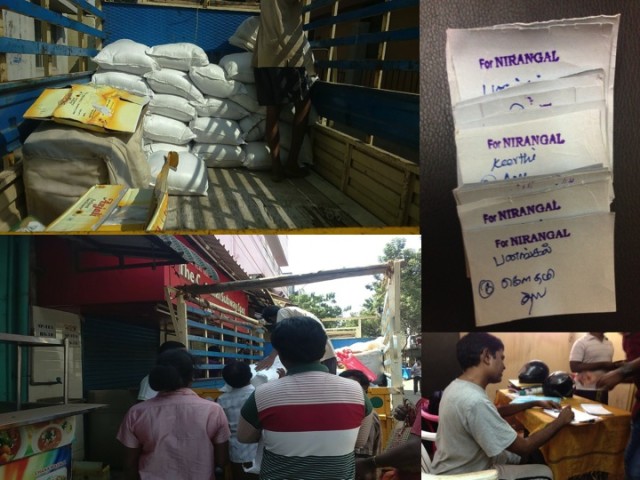 The remaining three sacks of provisions will be distributed to three transwomen identified in the K.K. Nagar area.

The number of 15 listed in our previous post as belonging to “other areas” has been revised to 25, based on reports from the ground. Another set of 15 beneficiaries has been identified in T-Nagar.

Dec 25: Orders were placed on Christmas for the next batch of provisions. These will be packed at my place on Dec 26 and distributed soon afterwards.

We have also received in-kind contributions in the form of clothes from Vikalp, Vadodara. Some kilos of Rice and toor dal have been received from one of the local donors, who also contributed monetarily. Thanks for all this!

The overall estimate of need has gone up to 234, and we currently have funds (Rs. 76,800 at Rs. 1200 per set) to meet the additional numbers of 64, thanks to the generous outpouring of support.

We are now examining recovery needs besides one month of provisions. The Saidapet area has been assessed to require kitchen utensils (approx. 25 homes of transgender community members, initial estimate) that have been washed away along with other possessions: ground estimation is currently underway. We are continuing to assess needs besides provisions for other localities as well.

The “we” here includes volunteers from Orinam, Nirangal and Sahodaran and unaffiliated individuals.

Felix has been proudly associated with the Orinam/MP collective since 2005, and has watched it grow from an online list and support space to what it is today. A techie by profession, he is one of the editors of this website, and is in love with the Chennai International Queer Film Festival. He helps organise through Orinam in association with others.

← Previous post
Not Them vs. Us: Aishwarya Rutuparna Pradhan, OFS
Next post →
Sampoorna’s response to MSJE Transgender Rights Bill