(Press release and pictures below)

The calls and emails began to trickle in on the evening of Monday, July 4. First it was an email from a member of MP mailing list, based in the US. Then it was an ally from NDTV who had covered LGBT issues at a previous Pride. By Monday night, LGBT folks and supporters in Chennai, and elsewhere in India and abroad, were fuming at the news that India’s Union Minister for Health, Ghulam Nabi Azad, speaking at a national conference for zilla parishad leaders, had declared male-male sexual behavior to be a disease, unnatural, and a western import. This not only reflected the Honorable Minister’s ignorance and homophobia, but was a serious setback to India’s National AIDS Control Programme (NACP-III) that has been working hard to create safe and supportive environments for sexual minorities so as to facilitate their access to health, especially HIV, services. NACP-III is a programme of the National AIDS Control Organization (NACO), a unit of Azad’s Ministry of Health and Family Welfare. Irony?

By 7 am Tuesday morning, the mobile networks were abuzz with calls among local community members, supporters, and activists in Mumbai, Delhi, Kolkata and Bangalore. The conclusion was unanimous: we needed to protest, soon, and in a concerted manner across the country. Individuals wrote to mailing lists, contacted NGO friends and their media allies. A request for police permission for the protest in Chennai was rejected. Nevertheless we decided to go ahead, with the NGO Sangama (a sexual minority rights and sexual health organization with offices in Chennai and Bangalore) taking the lead in the protest. Members of the Chennai Rainbow Coalition – a collective of LGBT individuals, supporters and NGOs – who had barely set down their placards and banners after the recent Chennai and Thrissur Pride marches, were mobilized through text messages, phone calls, Twitter and Facebook. A media release was developed (see below).

About 100 people showed up at the protest, and a subset made it to the press conference following it, while the others were asked by the police to disperse. Not bad for less than half a day of mobilization. The police were very polite: no arrests or bullying. The sensitization of police to queer issues in Tamil Nadu over the years has worked remarkably well!

The press conference was very powerful. Coalition members had thoughtfully brought in placards and a rainbow banner. We rehearsed what we were going to say – two people – one for English and one for Tamil – on each of the ‘disease’, ‘unnatural’ and ‘Western import’ issues. Some more folks to address the issue of invisibility, and some straight allies to point out why this was not only an LGBT community issue, and why all of society needed to support the cause.

About seven media houses showed up and a few stragglers were duly provided with sound bytes and photos. See pics and media release below. For more pics please check out Preeti Shekar’s album 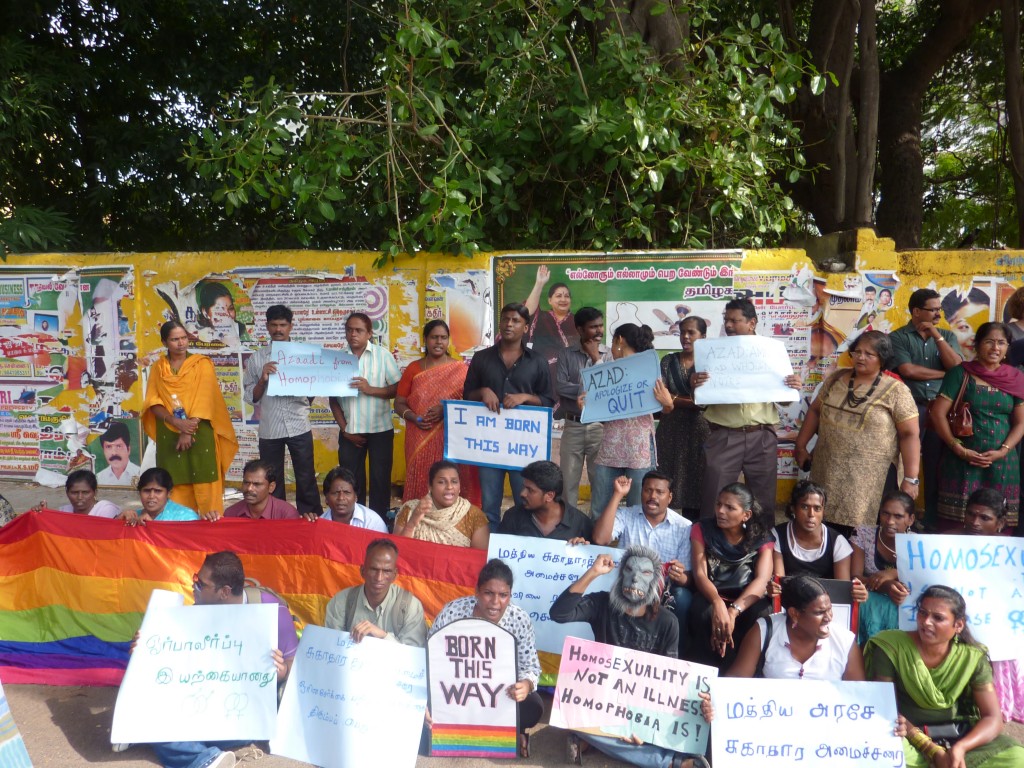 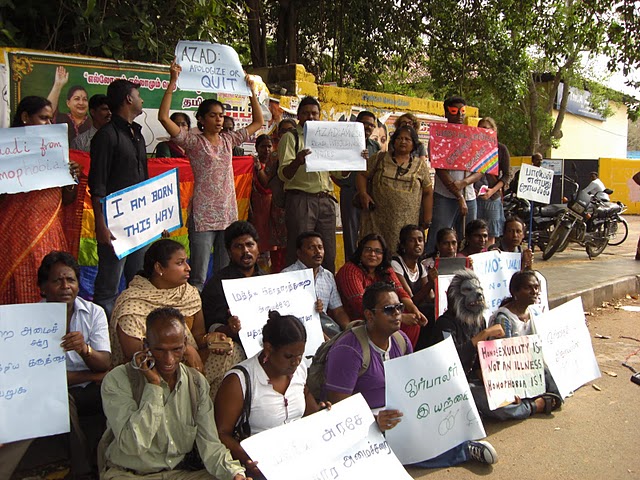 The Honorable Minister’s statement reveals his abject ignorance of international medical and scientific opinion that homosexuality is not a disease. No less an organization than the World Health Organization removed homosexuality from the International Classification of Diseases (ICD-10) in 1990. India’s most prominent psychiatrists and mental health professionals have also stated that it is not a disease in their affidavit supporting the upholding of Delhi High Court’s historic ruling on Section 377.

Research in behavioral ecology has documented the existence of homosexual behavior in over 450 species of animals; a rebuttal to those who claim homosexuality is unnatural, to bolster their prejudiced beliefs.

Finally, there is a vast body of scholarship that has documented the existence of homosexuality in the Indian sub-continent through history, across communities and cultures: effectively refuting the notion that it is a ‘Western import’.

The honorable Minister needs to educate himself on public health and scientific opinion grounded in evidence before airing his views or continuing in his position.  We also express our grave concern that the Minister is damaging the efforts of India’s National AIDS Control Organization Programme (NACP-III), an initiative of the Ministry of Health and Family Welfare’s National AIDS Control Organization (NACO),  that has been working to create enabling environments for men who have sex with men (MSM) and transgender people, so they can fully exercise their right to healthcare.