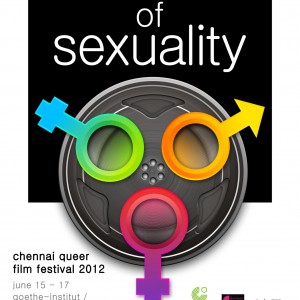 ‘Colours of Sexuality’, a three-day Chennai queer film festival organized by the Goethe-Institut/Max Mueller Bhavan in partnership with local groups Chennai Dost and Orinam, concluded Sunday, June 17,2012. It was one of over twelve events being held in conjunction with Chennai Pride month this year.

Chennai has been organizing queer film festivals and screenings since 2004 (see CQFF is back!). This latest event was attended by parents, media, and LGBT people from Chennai, Bangalore, Kozhikode, Kolkata, and Mumbai.

Twenty eight shorts, documentaries and feature films from ten countries, representing lesbian, gay, bisexual, transmen, transwomen and intersex people’s lives, played to a packed auditorium. Films include the India premieres of Charukesh Sekar’s “Mr. and Mr. Iyer” and Rashmi’s “My Inner Turmoil”. While most of the films were powerful and evocative, the highlight was easily Debalina’s “More than a Friend”, an offering from Kolkata-based Sappho for Equality, one of the oldest groups for lesbian, bi women and transmen in the country. “More than a Friend” set the stage for a public panel discussion on the subject of family acceptance and consequences of family rejection of lesbigay and trans youth. It featured counselor Magdalene Jeyarathnam, human rights lawyer Sudha Ramalingam, transwoman Sandhiya from Sahodari Foundation, Orinam member Sameer Ghunakikar and his father Vinayak Ghunakikar.

Also showcased during the film festival was an exhibition of photographs and art work on and by LGBT subjects.

The film festival elicited good coverage in mainstream media and on blogs. The resultant visibility has already led to an upsurge in LGBT and gender/sexuality-questioning individuals reaching out to local support groups. We also hope that it will lead to more parents seeking out locally available resources for psychosocial support such as counselors and other parents.

The film festival was volunteer-run and financed entirely by donations from community members and allies; with venue, audio-visual equipment and refreshments provided by Goethe Institut. For more information on the film festival organizers, visit

Chennai Pride • culture • LGBT • Singara Chennai • straight from the heart • Yes We Can!