Those who do not conform to society’s norms of ‘appropriate’ gender presentation and behaviour are subjected to harassment and bullying through much of their lives. Such gender non-conformity is a visible marker of difference, even though it may not be linked to same-sex attraction or to identification as transgender.

It started thus for me:

During school days, my teachers perceived extra grace in my dance movements and selected me to play the role of the female consort of a male deity in a stage play. They also spared me, as they did with girls, the corporal punishment they freely employed on boys.

Ever since, a series of unconnected events have kept reinforcing that I am different.

Some of these are,

Observing me walk in front of him, my uncle cautioned me to change my gait, lest people call me a ‘lady’.

I got called by different female nicknames. And one that tweaked the spelling of my name, Shankari.

Boys in class would re-enact movie sequences treating me as a woman and holding me in an endearing clasp or brutal grip, depending on whether they were playing hero or villain.

While removing stains in my hand, a maternal aunt wondered out loud why my palms were unusually soft.

A boy seated next to me in one of our crowded classrooms called out friends to touch me and feel the softness of my skin. I was touched and rubbed by a number of boys who vehemently agreed with the first one.

Two of my neighbours were irritated with my soft nature, and started hitting me regularly, till I broke down inconsolably one day.

A classmate started interacting with me in an overtly physical manner; nuzzling and teasing my face with his fingers and winking at me. I reacted with ignorance at first, followed by shock, and then with curiosity at what new things he might do. Finally, when I began to like the attention, he pulled away scolding me for not resisting him all these days. That left me thoroughly confused, and thereafter suspicious of the intentions of anyone who showed any signs of intimacy towards me. I was only able to speak to my mother about this twenty-five years after the incident.

My cousins suggested that I join ‘people like me’ who live in groups in some huts nearby.

A male teacher sent shivers down my spine when he subjected to me a sudden unwanted bad touch, and kiss.

The list goes on, but now all these other people have moved on in their lives leaving an indelible mark on me. Strangers still point at me on the road. Recently, a group of boys let out a peculiar sound on seeing me walk by. After the usual shock, I decided I should not let this affect me anymore. I went briskly and sat next to them, as if daring them to touch! You know what happened next?

They all fell silent.

Part II. Incident on a Train 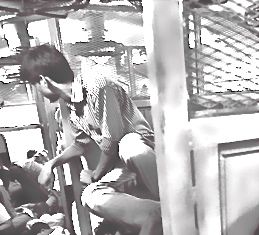 It was a day  I regretted I being at that precise location: the upper berth of an unreserved compartment of Jolarpet Express heading towards Chennai. A vantage point from where I could observe the behavior of those around me.

I was engrossed in a book, as I usually am during train journeys, when I became aware of  intermittent laughter, hustle and bustle around me. The tone of mockery in the voices was all too familiar, and my senses alerted me that something was amiss.

On the floor of the compartment, standing below me, was a short, bulky and dark-complexioned man in his twenties, wearing pants and a shirt, the fingernails on one hand painted a dark red. He was being smothered on all sides by a  group of laughing, jeering men, who addressed him as ‘Bajji’. One of the men said something in his ears in a seemingly endearing tone. Bajji rebuked the man in a way that suggested the man was known to him, and tried to push him away. Only to end up entangled in the arms  and gropes of more men.

What I saw after that was too much to bear. A tall man kept grinding  against Bajji from behind, while holding the latter’s shoulders and simultaneously engaging him in conversation. A few others made comments  that were not  audible in the noise of the moving train. At the next station, a passenger seated below got down, leaving his place vacant. Bajji’s ‘peers’ generously offered the seat to our Bajji. But wait, it was not the vacant seat they offered, but the lap of another man who had occupied it by then. The man behind him firmly  clasped Bajji by his waist, while the man who was nuzzling him called in a man with curly hair to join in the action. This curly-haired man took his position in front of Bajji. Now Bajji was captive, positioned in a such a way that he was imprisoned by male bodies—for I would not like to call them human beings, after witnessing what they next did to him. The man who had Bajji on his lap, tightened his grip around Bajji’s waist. The curly-haired man began squeezing Bajji’s chest. Bajji tried to push those fingers away but his hands were then promptly restrained by another man. It was neither affection nor curiosity. It was utterly cruel abuse!

My own prior experiences of harassment made me feel that Bajji needed help, but multiple thoughts held me back. What if I had misunderstood the situation? How could I, on my own, confront a group of passengers? What if these people were an organized gang of traffickers?

I looked at the co-passengers seated around me. Most were sleeping or completely unconcerned by what was happening.

As I hesitated, mustering the courage to intervene, I waited for a cry from Bajji, an audible confirmation of his distress, so I could also cry out loud and alert people to his predicament. But to my surprise, Bajji mustered a wan smile every time some atrocity was committed on his person. Now and then he would wipe his eyes, as if to prevent tears from rolling down. Perhaps he had learned that crying would only provoke further abuse.

The worst part was yet to come. A loud-voiced bystander asked the men surrounding Bajji what they were doing. One of them replied that they were auctioning Bajji off. A few quoted prices on him, much to the merriment of the group. One of them remarked that the auctioneer could earn a fortune through Bajji. I looked helplessly at Bajji. I noticed that he forced himself to join in the laughter, as if wanting to belong to the group! Perhaps he had been socialized to be manly and face the abuse without shrinking or running away.

The train then reached Arakkonam junction and he asked one of his ‘friends’ to help him get his bag from the luggage rack. A tall man pulled down the bag and handed it over to Bajji who then scurried away.

I am still struck by the violence of the episode.

Do such incidents happen every day? How long will Bajji, and others like him, survive these attacks and insults?

Or, was I over-reacting about something over which no other co-passenger worried?

Why did circumstances place me so close to such a harrowing event?

How should I respond if I were to find myself in such a situation again?

Dr. Shankar teaches at a business school in Chennai, and volunteers with Orinam.