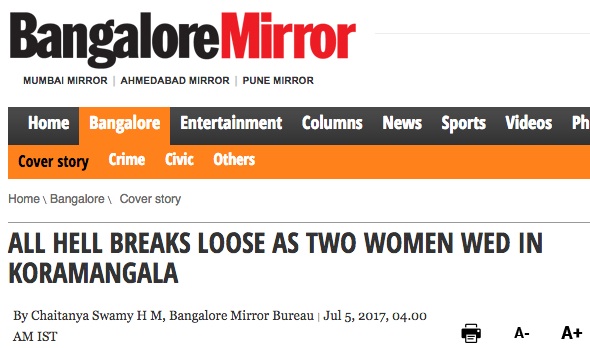 On Wednesday, July 5, Bangalore Mirror published on its front page a news item titled “All hell breaks loose as two women wed in Koramangala”. The news item proceeded to give a one-sided account of the women’s relationship. It published salacious details about how their relationship started and went on to falsely claim that the women had gotten married. Further, the news item mentioned two quotes from lawyers saying that they were in an “unnatural union” and would be “punished”, and only one from a lawyer, who was misidentified, saying that same-sex relationships per se are not criminalized under Section 377 of the Indian Penal Code 1860. 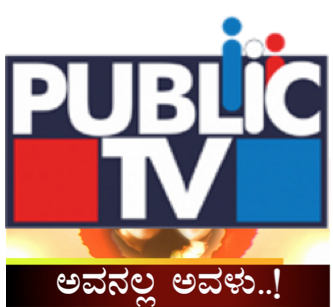 At the same time, Public TV, a Kannada news channel, also obtained the contact details of one of the women, and called her to appear on their show. When she refused, stating that she wished to keep her life private, the reporter from Public TV told her to “wait and see”. Subsequently, Public TV uploaded perfunctorily blurred pictures of the women on their Facebook and Twitter feed, with captions insinuating that they were in an incestuous relationship. Public TV continues to harass one of the two women by constantly calling her and demanding that she appear on this show.

In case anyone is doubtful about the repercussions of such irresponsible reportage – one of the women was fired from her employment with immediate effect, within a few hours of the Public TV report.

As civil society organisations that work on the rights of LGBTIA+ individuals, we are horrified at the absolute lack of concern that media organisations demonstrate for the lives of people that they are reporting. We know that this is an incident that involves tremendous amounts of domestic violence and abuse. We are also aware that these women are living in constant fear for their lives. They have endured domestic violence, police harassment, and threats to their lives, and had achieved a semblance of peace for themselves. However, the actions of media houses have shattered this hard-earned respite, and now they are again forced to be on the run.

This is not the first time that media houses in Karnataka have chosen to report in this manner. TV9s reporting on Operation Anandi had devastating impact on the lives of the transgender women involved, some of whom continue to languish in jail. Media houses refuse to acknowledge actual human lives in their reportage, and absolve all responsibility for consequences. Every time a media house publishes a report like this; LGBTQIA+ persons are pushed further into the closet, and are made more vulnerable to violence.

Moreover, we understand that the police themselves have leaked much information to the media. It is disconcerting that in spite of closing all formal proceedings, the police continue to interfere in the lives of these women, and are harassing them using the media.

As a group of civil society organisations concerned for media reportage and its impact on the rights of LGBTQIA+ persons, we are calling for a press conference tomorrow, July 6, 2017, at 1 pm, Bangalore Press Club.

News9/Deccan Herald and TheNewsMinute call up activists for directions on how to respond to the story:

Public TV airs a special (link not yet up, but this smaller package will show you enough how terrible the reportage is: https://www.youtube.com/watch?v=rnGBVsHu3p0 | It was also their ‘breaking news’ in the) 10:30pm bulletin)

← Previous post
Breaking the Binary: a LABIA research study
Next post →
Not legal doesn’t mean illegal: The situation for queer individuals in India