Sahodaran, one of Tamil Nadu’s oldest LGBT+ organisations, has conducted and published a study on bullying of sexual/gender minority persons as students, based on recollections by adults.

Some key findings include:

“Only 18% said that they had reported incidents of bullying to school authorities, to which authorities responded as follows: 29% were asked to change their perceived feminine mannerism/behaviour to avoid being bullied and 49% were asked to ignore the incidents. Only 53%1 of those who had complained reported that authorities took action against the persons who bullied them.

” About one-third (33.2%) reported that bullying played a key role in discontinuing school. More than three-fifths (63%) reported lowered academic performance while 53% reported having skipped classes.” [Quotes are from the research brief available here] 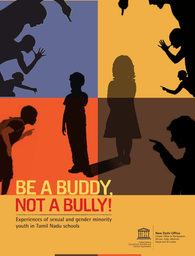 The study concluded with recommendations for measures to prevent and mitigate bullying such as: monitoring bullying and implementing anti-bulling policies, raising awareness among students and training of teachers on diversity in gender and sexuality, establishing mechanisms of for confidential reporting of bullying, and providing supportive counselling services for survivors of bullying.

The study ‘Be a Buddy, Not a Bully! Experiences of Sexual and Gender Minority Youth in Tamil Nadu’ jointly published by UNESCO New Delhi and the Department of School Education, Government of Tamil Nadu, was released on June 11, 2019 at the Anna Centenary Library.  It was one of the events held in conjunction with Chennai Rainbow Pride 2019. The research brief is available here and the full text of the research study is available here.

Congratulations to Sahodaran and partner groups Thozhi and C-SHARP, and all community members, including research investigators,  who contributed to this important study.

← Previous post
Statement on Ms. Koovagam and Vedanta
Next post →
Collective Statement by The Queer Muslim Project on Abrogation of Article 370