Bullying, abuse and harassment of LGBTIQ* students in educational institutions takes many forms. For Tushar, 21, a student at the Indian Institute of Science, Bengaluru, it was an anonymous blackmailer, who tried to extort a substantial sum of money (Rs. 5000) from him by threatening to out him on campus as gay.

At first, Tushar thought that the note slipped under his hostel room door on Oct 11, 2015, was some sort of prank by a fellow student. The next one read: “I am not joking… this is important for both of us as I need the money and your secret won’t get out. If your secret is leaked you will be hated by everyone and your career will be ruined in IISc”.

The notes kept coming. Nine in all, over the course of five days.

And they got nastier. On Oct 16,  when the blackmailer realized that Tushar wasn’t about to yield to his demands, he pinned a homophobic note on the hostel notice board outing him.

Says Tushar: “[t]he notice was first seen by one of my friends and removed by him. He brought it over to my room asking me if I was fine and talked with me for a while. Subsequently, sometime during the night, a similar notice was put up with a terse handwritten note at the end “YOU CAN KEEP REMOVING IT. I WILL PRINT MORE“. 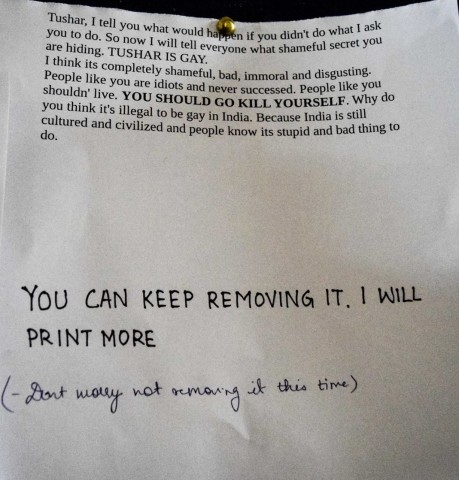 Thus outed to the entire hostel, Tushar, who had only been out to his closest friends until then, chose to respond with the following note on the same notice board: 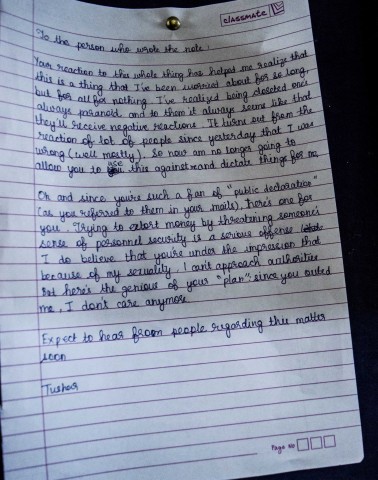 Tushar, who describes himself as ‘shy and a bit introverted’ said he felt relieved upon writing the note. Classmates and fellow-hostelites came up to him to express their support. In the weeks since the incident, he, with the support of friends, lodged a complaint with the university administration. At the time of publishing this note, he is still awaiting formal action in response.

Episodes such as these suggest that even large, supposedly progressive, campuses with support groups and allies, are not immune to bullying and harassment of LGBT students. It raises questions about the ability and willingness of the campus administration to respond swiftly and effectively to complaints received.

The familiarity of the perpetrator with the campus, hostel and locations where he asked the money to be placed, strongly suggests that he is a student, causing his actions to fall within the purview of ragging. The 1998 amendment of the Karnataka Education Act includes in its definition of ragging “causing, inducing, compelling or forcing a student… to do any act which detracts from human dignity or violates his person or exposes him to ridicule or to forbear from doing any lawful act, by intimidating., wrongfully restraining, wrongfully confining, or injuring him or by using criminal force to him or by holding out to him any threat of such intimidation, wrongful restraint, wrongful confinement, injury or the use of criminal force” [1].

Further, the University Grants Commission regulations on ragging, released in 2009, include extortion within their definition [2]. Such anti-ragging policies need to be made explicitly inclusive of homophobic and transphobic bullying, as well.

Finally, while the current Sexual Harassment in the Workplace Act [3] is limited to redressal for ciswomen, we urgently need measures to address sexual harassment, including blackmail and outing threats, of queer and trans individuals who are not ciswomen.

Some Orinam resources to make educational institutions more LGBTIQ* inclusive are here [4], and a list of campus LGBT initiatives including Queer IISc collective is here [5].

We at Orinam are aware that coming out [6] is not a universal or readily available prophylactic for such expressions of homophobia as blackmail and extortion [7], and recognise that such forced outing can have disastrous consequences for many. We also realise that for some of us who are visibly different in our gender expression, being in the closet is not even an option.

The caveats notwithstanding, we applaud Tushar for his courageous response, and stand in solidarity with him and the queer/trans and ally communities at IISc in their efforts to obtain justice.

Tushar is also planning to speak out to his peers on sexuality issues, and hopes that other queer students will find this to be a source of support. He eventually plans to come out to his parents, a rite of passage that – while considered before – hasn’t happened yet.

A shout-out to the friends who have supported him at this time. In the words of Anubhav, a member of the campus LGBT support group Queer IISc who accompanied Tushar to the university administration, “Our friends supported us irrespective of orientation, because a crime is a crime, and victims are our friends, relatives, people who we care for, not ‘gays’, ‘lesbians’ or ‘transgenders’“.

Thanks to Tushar and Anubhav for their input, and Advocate Amba Salelkar for pointing out that extortion is covered within the UGC definition if ragging.

[1] The Karnataka Education Act, 1983. (with amendments). Online at http://orinam.net/content/wp-content/uploads/2015/11/Karnataka_Ed_Act.pdf

[3] Ministry of Law and Justice, Government of India. 2013. The Sexual Harassment of Women at Workplace (Prevention, Prohibition and Redressal) Act, 2013, Online at http://www.lawyerscollective.org/wp-content/uploads/2013/12/Sexual-Harassment-at-Workplace-Act.pdf