On February 20, 2017, an individual named Biswajit Nath uploaded a video on Facebook with the caption “Beware. What is happening in the name of kinnar? Feel it and share it. What are the authorities doing about this” (translated).

Biswajit Nath was the managing editor at News Next One, an online digital media portal from Assam. In the video, a kinnar (trans woman) is seen outside a wine shop and Biswajit Nath, who is recording the video, confronts her and asks her where she lives, and who “runs her”. He continues to publicly harass her and abuse her. He asks her “real name”. He even asks her to take her clothes off to prove that she is a “real” kinnar. The video ends with him shouting and screaming at her.

The video was brought to the notice of Xukia by concerned citizen/ally Abdul Kalam Azad and queer activist Rafiul Alom Rahman. Together we were able to raise enough outcry on social media. 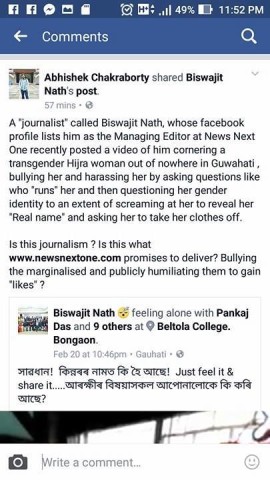 The news channel initially replied saying that the journalist’s action does not represent the channel’s stand, that they respect everyone’s rights, and that the video did not appear on an official page of the channel. On March 10, the journalist retorted that he had simply “initiated a discussion” and that there were a lot of fake kinnars. 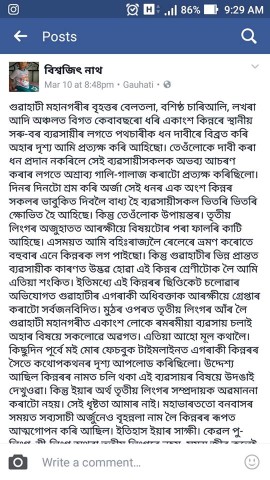 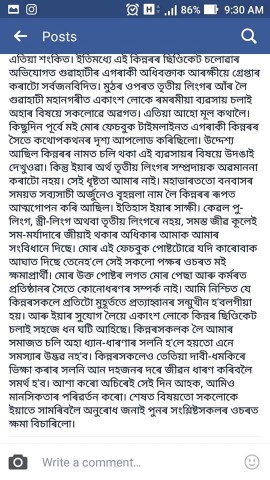 Finally, we sent a written complaint to the channel. 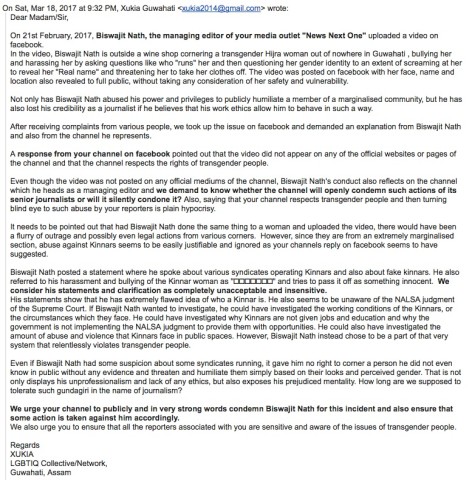 …they acted on our messages, and took action, by terminating Nath. 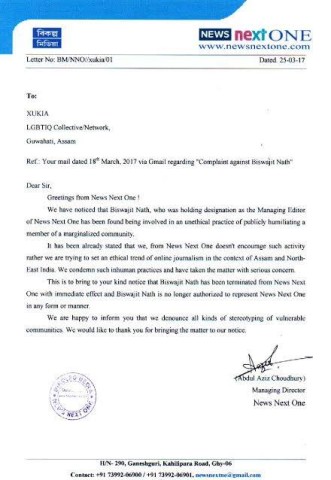 Kudos to News Next One for acknowledging that the practice was unethical, and for taking action against Nath.

This happened because people together raised their voice and ensured that the transphobic journalist and the channel are made accountable for their actions.

Orinam’s note: Taken together with other examples as the multi-city responses to the TV9 debacle of 2011 in Hyderabad, and protests against a homophobic 2013 piece by Mohana Krishnaswamy in The Hindu, Xukia’s incisive intervention in this News Next One episode illustrates the power of community and ally action in opposing queer-/trans-phobic media coverage and demanding accountability. Please let us know of other examples of community interventions such as these. Do check out (and contribute material to) our guidelines for ethical media coverage of LGBTIQ+ issues in India.

I am currently (as of March 2017) a Bachelor's student and have been actively involved with the Xukia collective in Guwahati, Assam, since 2014.

← Previous post
Anil Divan: A friend of the LGBT community
Next post →
Gauri, Gayatri, and the Vicks ad